Life on the road can be a grind.  Getting good sleep is nearly impossible.  Hundreds and hundreds of miles in the car wear you down even more.  And eating well?  Nah.  I literally had Papa John’s three days running last weekend.  Three.  No human should ever do such a thing.  Theoretically speaking, I should be dead.

Miraculously, I survived.  And managed to play shows in Iowa City, Ames and Des Moines.  Gilbert St. in Iowa City was a great time.  Headliners in Ames bumped the start time up a little bit in a successful attempt to prevent the same kind of riot that happened on the Iowa /Iowa State weekend the last time we were in town.

In Des Moines we played a joint we’d never heard of before called the Kirkwood Lounge.  Interesting place.  It’s not really a venue, and I’m not sure how often they even do music.  But what the heck.   Anyway, we did a makeshift set up (as evidenced below), played, and the sound was huge/awesome.  I can’t remember playing a show that felt better.  Funny how that works out. 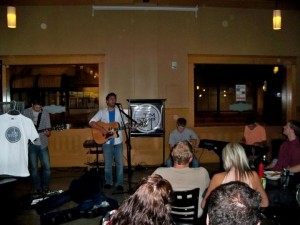 So Iowa, as usual, was a great time.  There’s no place like home, I guess.