We were in our dressing room, just Maria and I, when Jay first passed. For all we knew, that would be the only glimpse of him we’d see all night. After all, the guy has no need of exchanging niceties with anyone – I mean, he hosted The Tonight Show for 22 years, he’s currently doing 280 dates a year and he’s got a new TV show (Jay Leno’s Garage) going. Dude is doing just fine. And Maria seemed perfectly thrilled that we saw him at all.

Not 30 seconds later though, he comes into our room and right up to us.

“Thanks for doing this.”  Sure, I don’t generally agree to share a stage with massive celebrities, but made an exception this time.

If I’m honest, he seemed a little tired, and it was slightly perfunctory, but the gesture was appreciated. Again, he didn’t have to.

An hour later, after the meet and greet, the back stage area clears out. Just empties. And I realize that he has no entourage with him whatsoever. No handlers, no team, nothing. It’s just him. I had a bigger crew than he did (hi, Maria). And for the next 30 minutes, the three of us stood around chatting about anything and everything: old friends of his that had pictures on the wall (Natalie Cole, America), Trump (he doesn’t like the guy at all – and it’s personal, not political, he adds), sports stars (they like talking about themselves, which was good for him as a TV host who doesn’t know or care a thing about sports) and, of course, cars (he had recently test driven a super-charged Lexus in my hometown of Davenport, IA – which he barely remembered cuz he does that everywhere he goes). He was easy and gracious in conversation, which I suppose you’d expect from a comedian who made a living interviewing people.

Eventually, 8:55pm rolls around, he wishes me luck and I play my set: 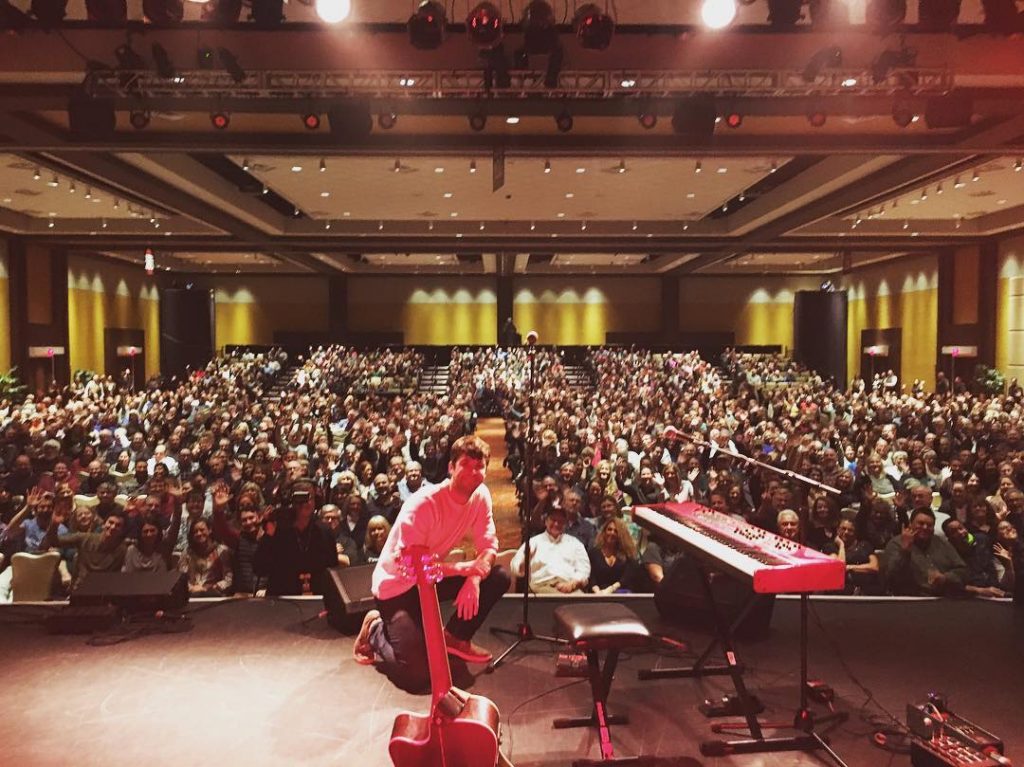 After his set, we meet back stage again, and I ask him on my way out if he has any advice for a guy like me. I expected a quick line, something rote or rehearsed. Instead, he spends the next 10 minutes giving me earnest, insightful thoughts about his career and how they could be applied to mine.

The whole thing was just refreshing. Here’s a huge star who’s earned every right to blow people off. Instead, he’s accessible and, what’s more, interested.

In a world where fame is synonymous with egotism, it’s nice to have met someone who’s gotten to the top of the mountain, and now just wants to help the next guy up. Cheers, Mr. Leno.